← Back to Main Page

As a part of National Forensic Science Week 2021 (September 19-25, 2021), the FTCoE is offered a murder mystery event! Each day of the week, a new evidence-based clue was revealed on the website below. Test your sleuthing skills to see if you can identify the culprit!

The story, names, characters, and incidents portrayed in this murder mystery are fictitious. No identification with actual persons (living or deceased), places, buildings, and products are intended or should be inferred.

The goal of any forensic practitioner is to be an objective, fact-finding party to the criminal justice system. This activity is purely meant to be a game that utilizes forensic science as a conduit of information to assist in solving this fictious case.

Trey Myers had not heard from his friend John Doe in three days. This behavior was very unlike John. Trey and John talked almost every day and were gearing up for a hiking trip in the Purple Haze Mountains. Trey decided to take a drive over to John’s house to see if he was there. Trey observed John’s vehicle in the driveway; however, when he knocked on the door, he received no answer. Trey knocked several more times and still received no answer.

Trey called John’s on-again off-again girlfriend, Kate Bishop, to see if she had heard from him. Kate didn’t answer the phone, but Trey wasn’t surprised. He figured she was still mad at him for deciding to go in her place on the hiking trip. Originally the trip was planned for John and Kate as an anniversary celebration, but John and Kate had one of their ever-so-famous fights, and Kate decided she wouldn’t be going. John asked Trey to join instead of completely canceling the trip.

Since Trey pet sits for John occasionally, he knew where John had a hidden house key. Trey used the key and entered the front door of the residence. Trey heard the television and headed towards the living room.  In the living room, Trey observed John’s roommate, Kerry Powers. Trey asked Kerry where John was. Kerry responded, “John is on his hiking trip. What’s your deal, man? How did you even get in here?” Trey responded and said, “I’ve been knocking at the door and you didn’t answer. We don’t leave for that trip for another two days. When was the last time you saw him?” Kerry responded, “I haven’t seen him in a day or so. Like I said, I thought he was already on his trip.”

Trey knew Kerry and John weren’t the closest, but John needed the extra rent money.  John had a gambling problem and owed some folks a lot of money. Trey also knew that Kerry was a recluse and didn’t say much, but Trey always had a bad feeling about him.

Trey asked if he could look around the house for a bit, but Kerry asked Trey to leave. Trey insisted he at least check John’s bedroom. It didn’t make sense that John wouldn’t be home if his truck was in the driveway.  Kerry was very insistent that Trey leave the property, but Trey pushed past Kerry and headed up the stairs to John’s bedroom. When Trey got to the bedroom, the door was locked. Trey reached above the door frame and fortunately found a key. Trey unlocked the door and entered the bedroom. Trey observed John laying deceased on the bed.

When interviewed by detectives, Trey stated that he last heard from the victim on February 19th, three days before the victim was found. After several texts and phone calls went unanswered, Trey was prompted to check on his friend. When asked if he knew who may want to hurt John, Trey said John owed a lot of money to some people, and had gambling debts. Unfortunately, Trey didn’t know any specific names. When detectives asked about Trey’s thoughts on the victim’s roommate, Trey said he never liked Kerry, but he didn’t think Kerry and John had any major issues with each other.

When interviewed by detectives, Kerry stated that he last saw the victim on the morning of February 19th, but left for work that evening. When he returned home around 6:00 a.m. on the 20th, he reportedly saw a car similar to John’s girlfriend’s leaving the neighborhood. He assumed John and his girlfriend left for their hiking trip. Kerry was not aware that John planned on taking the trip with Trey instead. Kerry reported that he was not close with John and it was normal for them to interact very little in the home.

When interviewed by detectives, Kate said she had last seen the victim on February 15th, the morning after their Valentine’s Day date night. Kate said John stormed out after they had an argument about John’s debt. The following night, Kate called John to discuss cancelling their anniversary trip, but John told Kate he was still going to go and take Trey instead. She stated that she had not seen or spoken to the victim since that phone call. 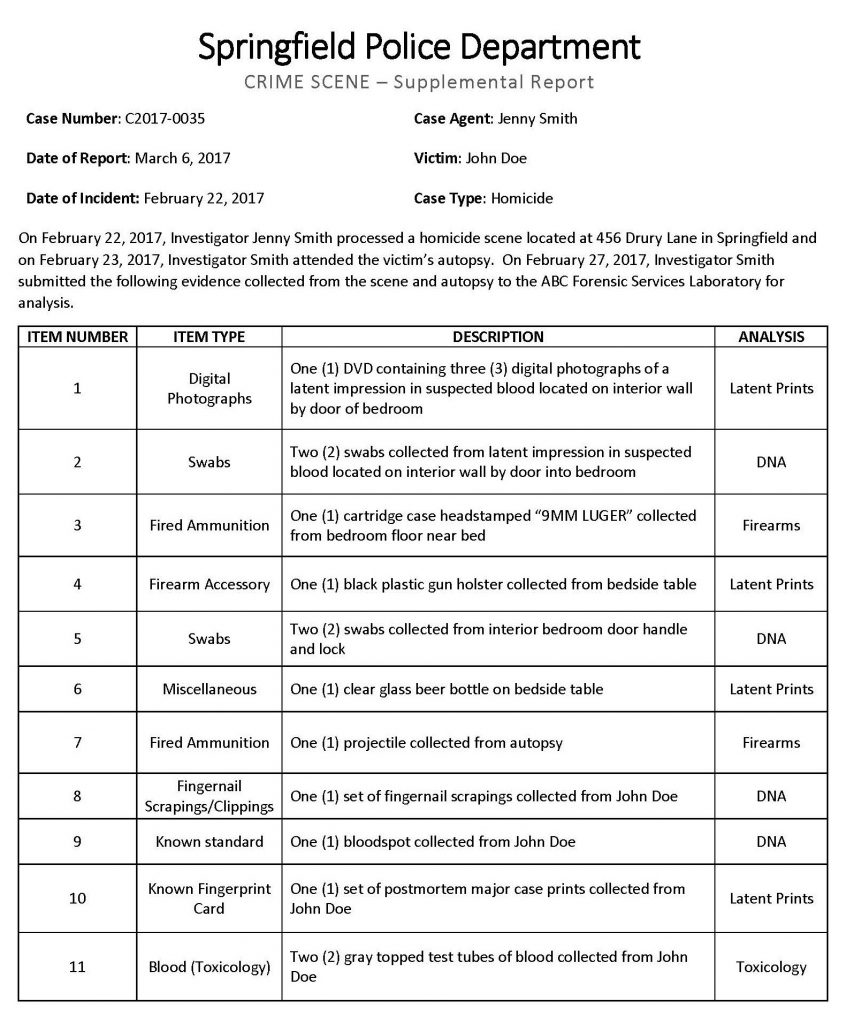 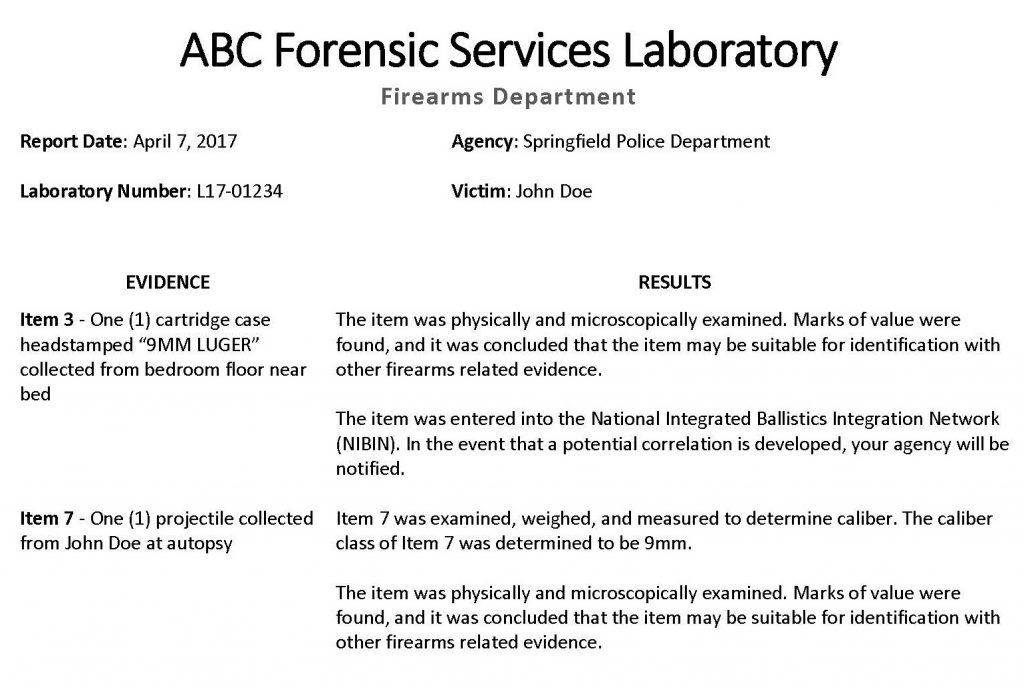 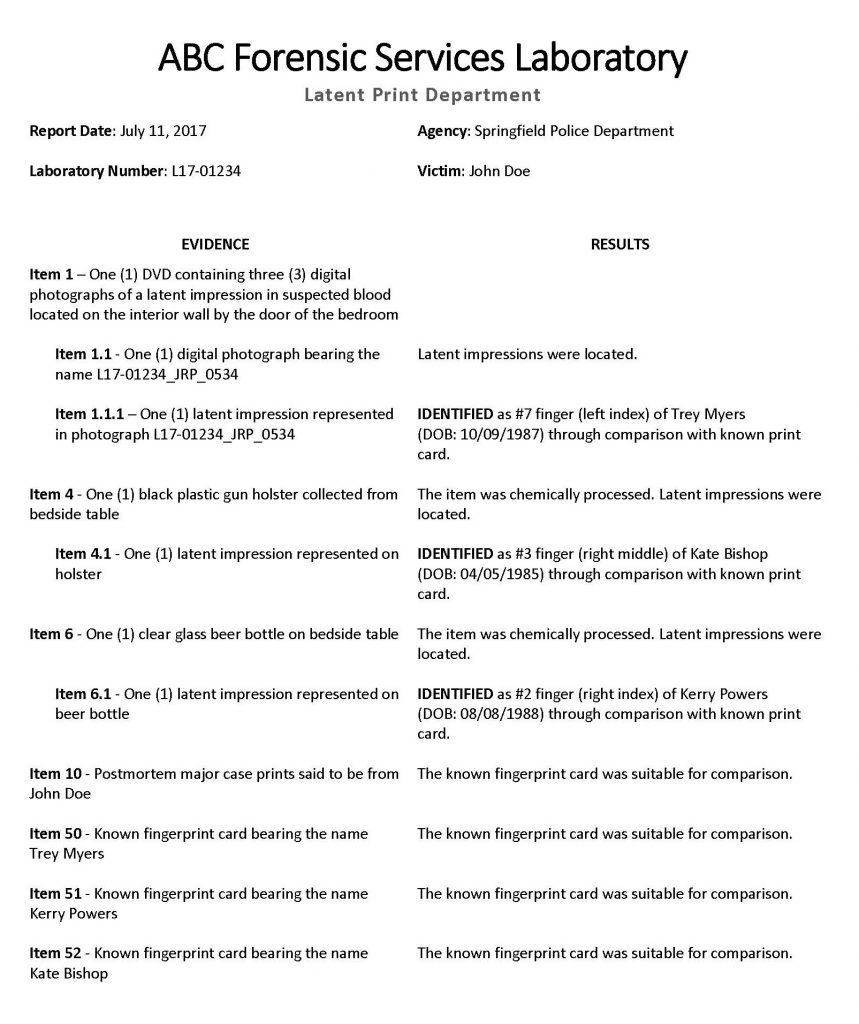 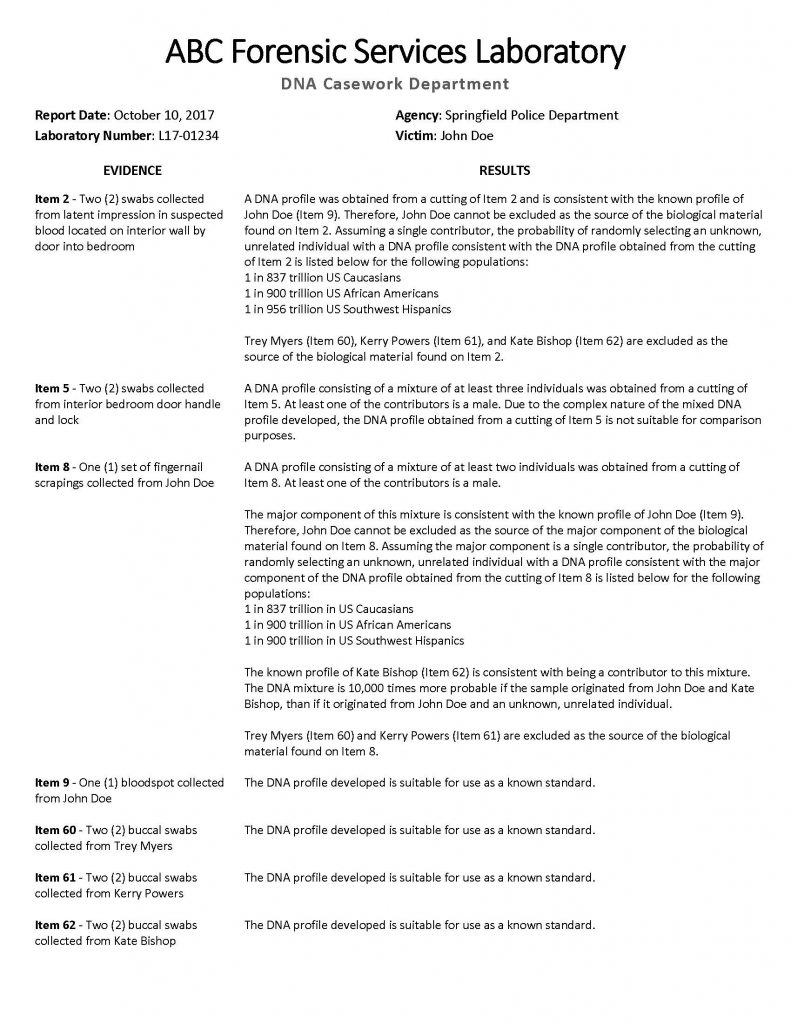 Following the hard work of the forensics laboratory, detectives received additional information regarding the evidence in the case. John Doe’s personal firearm was reportedly a 9mm, just like the cartridge case recovered from the scene and the projectile recovered from the autopsy. John was known the keep the firearm in the bedside table, near where the holster was found. Although no murder weapon was recovered from the scene, the combination of the firearms evidence and the location of the empty gun holster led detectives to believe that the victim may have been shot with his own weapon. They also believed the perpetrator mostly likely left the scene with the weapon.

The bloody fingerprint near the bedroom door was identified to Trey Myers. However, during his initial interview, Trey stated that he ran towards John’s body without thinking and touched the victim. After realizing John was dead, Trey staggered backwards in shock and touched the wall for support before collapsing on the floor and calling emergency services. Detectives determined that this was a reasonable explanation for his print in the bedroom, since he was the one who found the victim.

A fingerprint belonging to the roommate, Kerry Powers, was found on the beer bottle recovered from the victim’s bedside table, next to the holster. When questioned by detectives, Kerry stated that he was the last person to restock the beer in their shared home, so it was not surprising for his fingerprints to be found on objects in the home that he and the decedent both had access to. Without additional evidence, detectives determined the roommate’s fingerprint did not have much probative value.

A fingerprint belonging to Kate Bishop was found on a holster inside the bedroom. This holster was similar to the one that housed John Doe’s personal firearm, which was missing from the residence, and was normally stored in his bedside table. Kate’s DNA was also found under John’s fingernails indicating a possible recent close encounter between the two. This was slightly corroborated by the state of the bed and John’s lack of clothing.

Through a search warrant on John’s phone, detectives found several missed calls from Trey in the days leading up to when the decedent’s body was discovered. They also found texts between John and Kate on February 19, 2017, in which Kate asked to come over to John’s residence to reconcile. However, in Kate’s first interview, she said she had not spoken to John since he told her Trey was going in her place on their hiking trip, which was around Valentine’s Day.

As a result of the fingerprint and DNA evidence along with the inconsistency in her last statement, Kate was brought in for additional questioning. When presented with the evidence, Kate retracted her story and admitted to going over to John’s house on the 19th. However, she claimed that she left the decedent’s house a little past midnight on the morning of the 20th after another lovers’ quarrel. She claimed that the victim was still alive when she left.

When detectives asked Kate if she knew that the victim owned a firearm, Kate said, “Everyone knew he kept one by the bed for security reasons.” Detectives then asked if she knew what kind of gun John owned. Kate responded, “I think it was some type of handgun, but I don’t know much about guns.” When detectives followed up with if she saw the weapon while she was there or if she knew what happened to it, she said, “No.” However, when asked how her print got on the holster, she broke down in tears and asked for a lawyer. 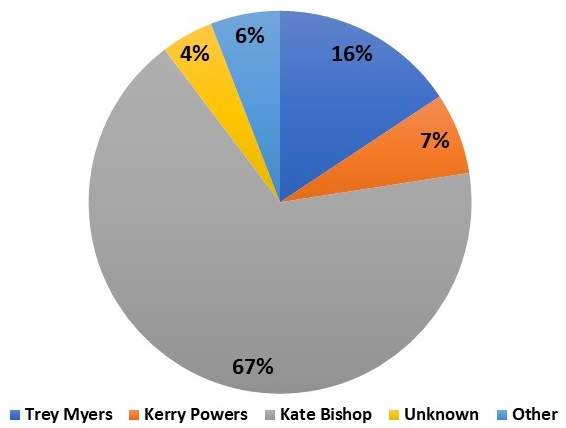 Thank you for playing along this week! We appreciate your participation in the event and hope you had fun along the way.

Some of the details from this mystery event were inspired by the real life 2008 murder of Travis Alexander. Check out the Just Science podcast Just the Jodi Arias Case to learn more!

Out of the survey responses we received, 67% of those who participated correctly identified Kate Bishop as the culprit!

We look forward to hosting this event again next year and will incorporate your feedback.

If you did not get a chance to respond to the survey and would like to still give feedback on the event, please email the FTCoE team at ForensicCOE@rti.org.

Funding for this Forensic Technology Center of Excellence event has been provided by the National Institute of Justice.

Original Release Date: February 3, 2023 In episode two of our Unidentified Human Remains mini season, Just Science sat down with Neal Parsons, a Research Forensic Scientist at RTI International, to discuss how rapid DNA analysis has become an important…
END_OF_DOCUMENT_TOKEN_TO_BE_REPLACED
← Back to Webinar Series Page This webinar originally occurred on February 2, 2023 Duration: 1 hour Overview Change can be intimidating and making a transition to a paperless system can be daunting task. This presentation will discuss two perspectives…
END_OF_DOCUMENT_TOKEN_TO_BE_REPLACED
Overview In partnership with the Bureau of Justice Assistance’s (BJA) Comprehensive Opioid, Stimulant, and Substance Abuse Program (COSSAP), FTCOE and its partners produced a series of short videos on how law enforcement officers, first responders, and other stakeholders can gain…
END_OF_DOCUMENT_TOKEN_TO_BE_REPLACED
Skip back to main navigation