← Back to Main Page

As a part of National Forensic Science Week 2022 (September 18-24, 2022), the Forensic Technology Center of Excellence (FTCoE) is offering a murder mystery event! Each day of the week, a new evidence-based clue will be revealed on the website. Follow along and test your sleuthing skills!

On Friday, September 23rd, you will be able fill out a mystery-related questionnaire with your thoughts on what occurred! Then, check the FTCoE website next Monday, September 26th, for the case review and read how the detectives closed the case!

1.) The story, names, characters, and incidents portrayed in this activity are fictitious. No identification with actual persons (living or deceased), places, buildings, and products are intended or should be inferred.

2.) Additionally, some parts of this activity represent laboratory reports. These reports should not be used as standards or templates for actual standard operating procedures. These reports are only meant to inform the reader of elements associated with this activity.

3.) The goal of any forensic practitioner is to be an objective, fact-finding party to the criminal justice system. This activity is purely meant to be a game that utilizes forensic science as a conduit of information to assist in solving this fictitious case.

Late one evening, Jack Sumpter was driving along a dark wooded road with his girlfriend, Jill Smart. They were headed home after having dinner in the city. “Oh honey, the food was delicious! I’m so glad we were able to finally have our date night!” Jill exclaimed. Jack looked over at Jill and said, “I had a really great time. I’m so thankful my boss let me leave work on time.” Just as Jack looked back at the road, Jill pointed to the roadway and screamed, “There’s a deer in the road!” Jack slammed on his brakes and tried to swerve around it but ended up driving off the road, down an embankment, and hit a tree. Through the haze of the airbag dust, Jack looked over at Jill and asked if she was okay. Jill replied, “I think I’m fine, but I hit my head against the window. Are you okay?” “Yes, I’m okay.” Jack replied. “I can’t believe I didn’t see that thing sooner! I’m really glad you’re okay.”

Jack got out of the car to assess the damage, while Jill called emergency services. Jack didn’t think the damage was too bad, but with the steep grade of the embankment and the shrubbery all around, he knew he would need a tow truck to get out. While trying to get his bearings, he could see a shallow river up ahead running underneath the road they were traveling on. Jack walked a little closer to the river to see if he could see any other landmarks. The only thing that caught his eye was a large drum shaped container in the river, near the bridge portion of the road.  He then climbed up to the roadway to see if he could see any mile markers but did not have any luck. Jill stepped out of the vehicle and asked Jack if he knew what address they were closest to. Jack responded that they were driving on Rose Water Lane and had passed the intersection with Fern Gully Quarters a few miles back. He also said their location was near a river and mentioned that emergency services may be able to find it on a map.

About 20 minutes later, an ambulance and police vehicle arrived. Emergency Medical Services assessed Jill and decided to take her to the hospital to evaluate her for any head trauma. Jack received a clean bill of health other than he might be sore in the coming days from the whiplash. While telling the police officer what occurred, Jack walked the police officer to his car to see the damage. When the officer looked out towards the river, he observed the container in the water. The officer was intrigued because two days ago he responded to the same location for a possible shots fired call. The water level was much higher that day and he didn’t see the container in the water. The officer walked closer to the container and realized it was a blue 55-gallon drum with a lid. He shined his flashlight on the barrel and saw two holes in the container that looked like bullet holes. He tried to get a closer look and realized he could see something white in the barrel. The officer put on gloves and tried to upright the drum. The drum was fairly heavy, and he could hear something shift as he righted the drum. The officer then unlatched the lid to get a better idea of what was inside. When he opened it, he saw the top of a head and realized a human body was in the container. The officer looked at Jack and said, “Sorry son, this just became a crime scene. It’s going to take a bit longer to get your car back.” 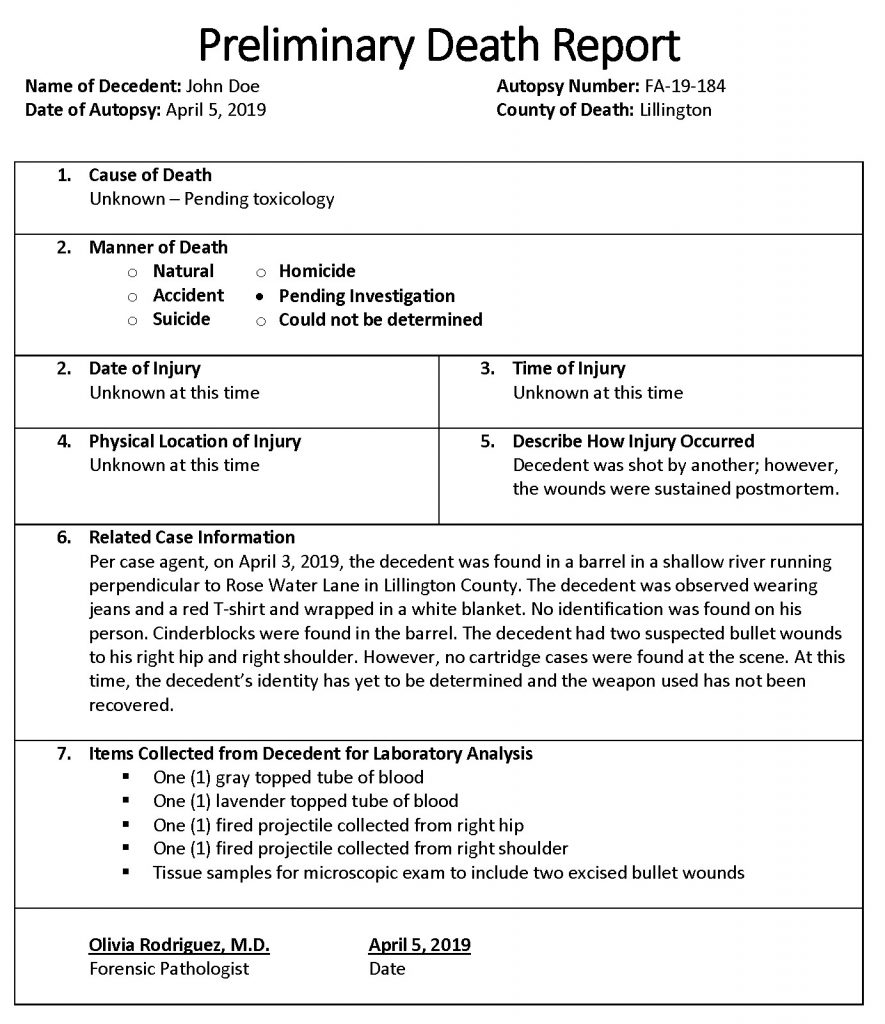 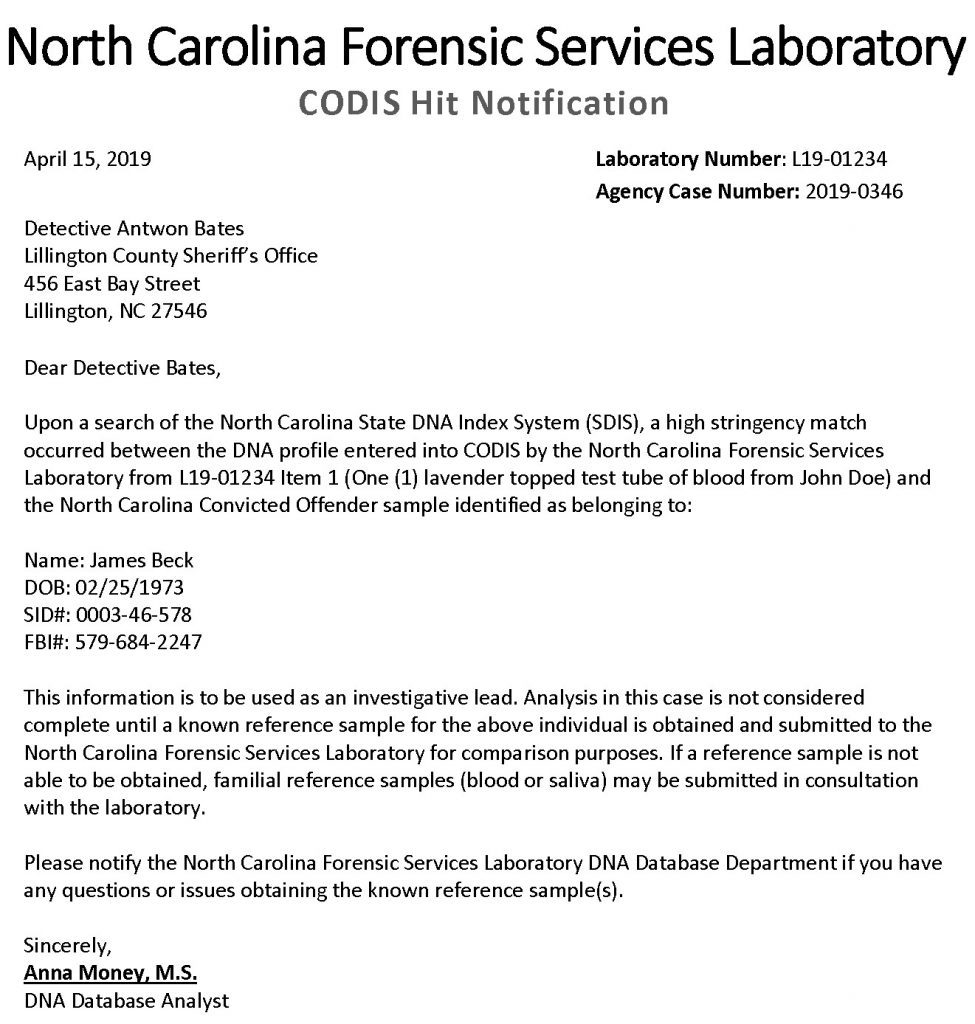 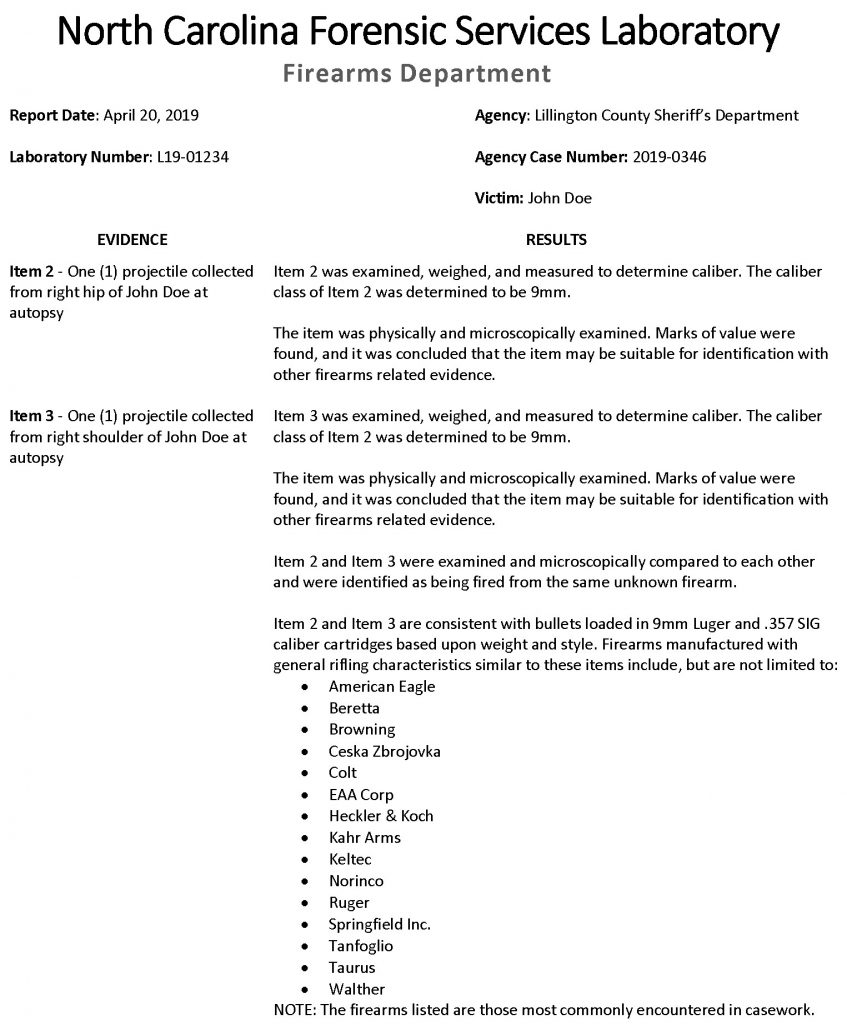 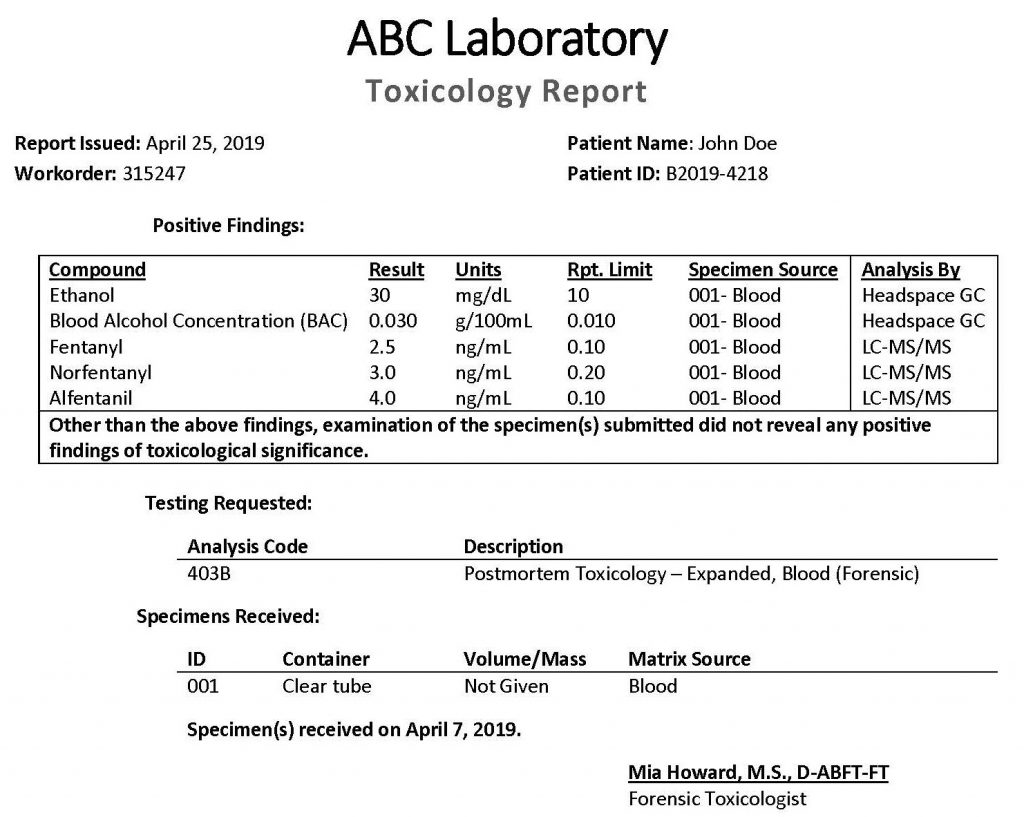 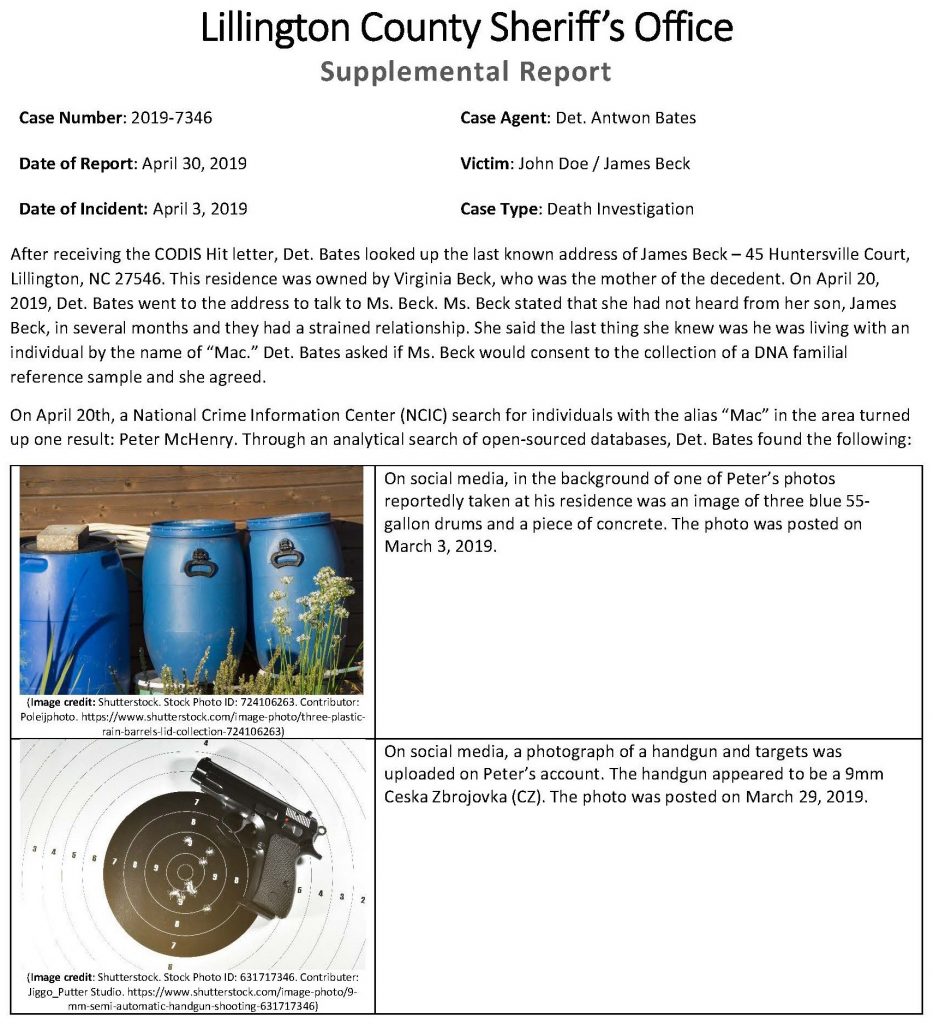 The crime laboratory ran the familial reference sample from Virginia Beck, James Beck’s mother, and confirmed that the decedent was an offspring from Virginia Beck. Additionally, Detective Bates spoke with one of Patrick neighbor’s and she said that one night a few weeks back, there was big party at Patrick’s house and that was the last time she saw James. Detective Bates was also able to get phone records from the cell phone company for James’ phone. He was able to see that the last phone call made occurred on March 31st and pinged to a cell phone tower near Patrick’s house.

Detective Bates asked Patrick to come down to the Sheriff’s Office to discuss more in-depth about what he knew of James and to discuss the couple of weeks he was living with James. Detective Bates asked Patrick specifically about what occurred on March 31st. Patrick was hesitant to talk at first, but when Detective Bates discussed the evidence, Patrick finally told him what happened. Patrick stated that he, James, and a couple of friends were having a party at his house where drugs and alcohol were present. His recollection of the night’s events were fuzzy, but when they awoke the next morning, they found James unresponsive. They tried to revive him but were scared to call the cops because of the drugs at the house. Mike Bowers, one of the friends at the party, said that they needed to get rid of the body or he could be charged since he brought the drugs and was on probation. Mike and Patrick put James in the barrel, loaded the barrel into his truck, and then took it to the river off Rose Water Lane. Mike used Patrick’s handgun he kept in his truck to shoot the barrel, hoping it would sink. 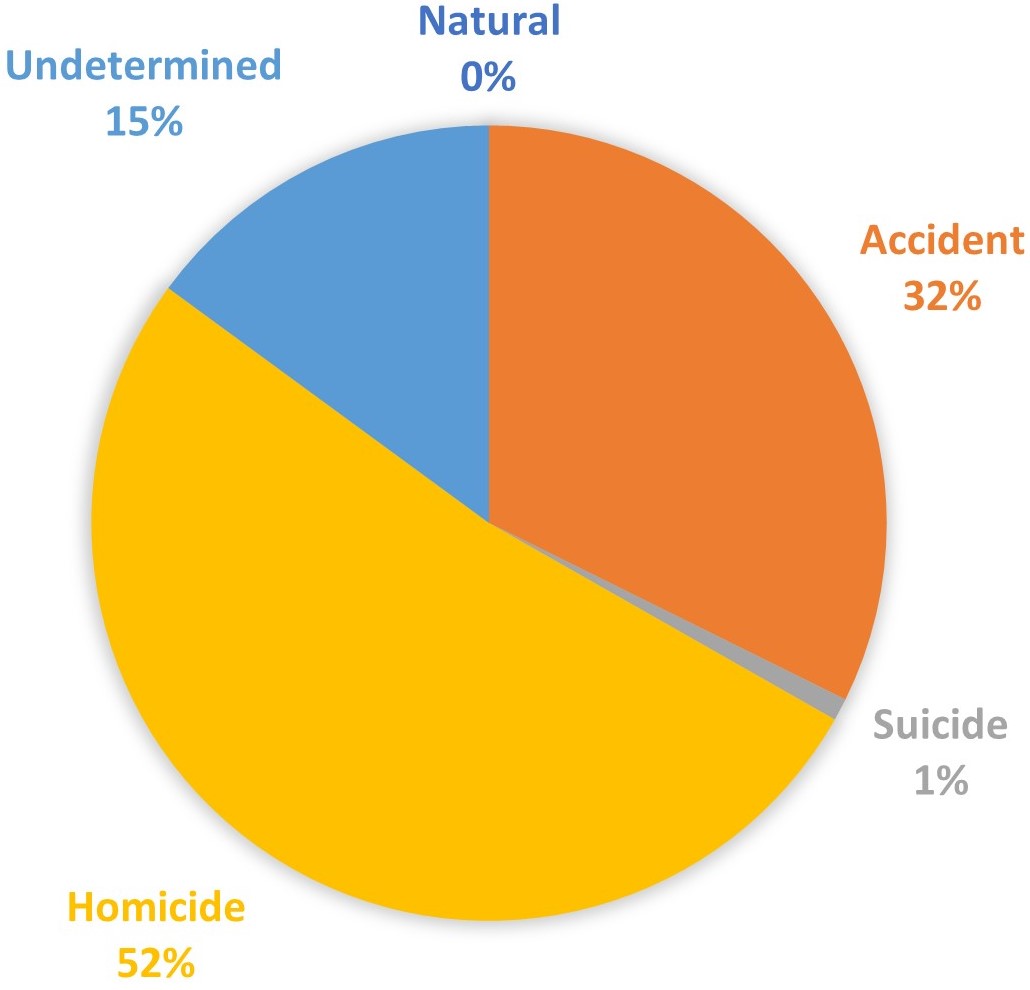 Thank you for playing along! We appreciate your participation in this event and hope you had fun along the way.

Out of the survey responses we received, 32% of those who participated correctly identified the manner of death as an accident, with many correctly guessing the cause of death as an overdose! Sometimes things are not what they seem, which is why a holistic approach to case review is important!

We look forward to hosting this event again next year and will incorporate your feedback.

If you did not get a chance to respond to the survey and would still like to give feedback on the event, please email the FTCoE team at ForensicCOE@rti.org.

Funding for this Forensic Technology Center of Excellence event has been provided by the National Institute of Justice, Office of Justice Programs, U.S. Department of Justice.

The opinions, findings, and conclusions or recommendations expressed in this event are those of the presenter(s) and do not necessarily reflect those of the U.S. Department of Justice.

Date December 2022 Overview The National Institute of Justice (NIJ)-in partnership with its Forensic Technology Center of Excellence (FTCOE) at RTI International and the National Center for Health Statistics, Centers for Disease Control and Prevention (CDC)-convened a virtual Medicolegal Death…
END_OF_DOCUMENT_TOKEN_TO_BE_REPLACED
Date December 2022 Overview The New Mexico Decedent Image Database provides access to whole body postmortem computed tomography (PMCT) images of more than 15,000 decedents, and a rich body of associated metadata, in support of research and education. There are…
END_OF_DOCUMENT_TOKEN_TO_BE_REPLACED
Date November 2022 Overview Recognizing the many challenges associated with adopting new technologies and other innovations in forensic science organizations, the National Institute of Justice (NIJ) formed the Forensic Laboratory Needs Technology Working Group (FLN-TWG) in 2018. FLN-TWG provides a…
END_OF_DOCUMENT_TOKEN_TO_BE_REPLACED
Skip back to main navigation